This article provides step by step instructions to configure and start up Apache Storm 0.9.4 Multi-node cluster. Additionally, this article also covers how to amend Storm script to start the cluster nodes without supervision.

This article assumes that you have got the basic idea of technical architecture and components of Apache Storm. If you are totally new to Apache Storm, you are strongly recommended to read the article - Introduction to Apache Storm.

Apart from above machines, please ensure that the following pre-requisites have been fulfilled to ensure that you are able to follow this article without any issues-

First step to install Apache Storm is to download its binaries on both the virtual machines. In this article, we will be installing Apache Storm 0.9.4 to set up cluster which can be downloaded from here.

Once the libraries have been downloaded on the virtual machines, you can extract it to a directory where you would like Apache Storm to be installed. We will refer this directory as $Storm_Base_Dir throughout this tutorial.

Once Apache Storm binaries has been extracted on all the virtual machines, next step is to configure these. Below diagram depicts the deployment architecture that we will be setting up - 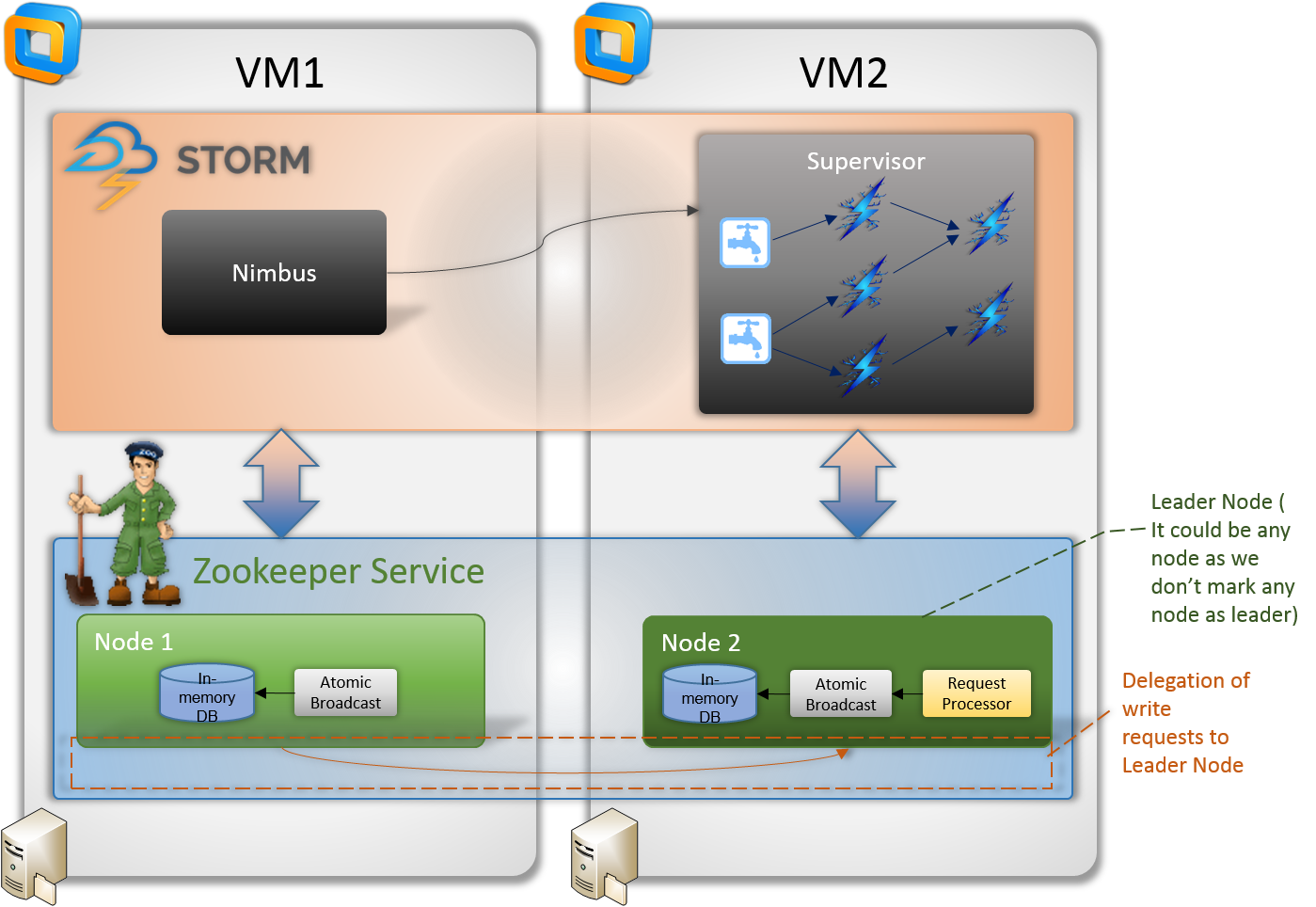 Since Storm cluster has two types of nodes - Nimbus (Master node) and Supervisor (slave node), there will be some difference in how we configure these nodes. We will be configuring VM1 as Nimbus and VM2 as Supervisor.

First, let's see the common configuration that needs to be done on all the nodes of cluster. Below are the properties that need to be set in storm configuration file called storm.yaml located in the directory- $Storm_Base_Dir/conf. Please create storm.yaml file if it is already not present in conf directory

In the above configuration, you would need to replace <path-to-data-directory> with the path to directory where you would like Storm to save its data. Ideally, you should create data directory in Storm base directory.

Once you are all set up, next step is to start the cluster. Here is the command to start Nimbus under supervision (you will not get control back after you run the script. It means that Nimbus process will not run as daemon process) -

Storm library also contains an UI that can be used to monitor Nimbus, Supervisors and topologies among other things. Here is the command to start this UI interface. This command can be run on any node (Nimbus or supervisor) but we will be starting it on Nimubs (VM1) -

Storm community strongly recommends to start Storm under supervision as Storm is fail-fast and shuts down if any error is propagated till Storm. However if you still want to start Storm without supervision, you may do so by following instructions -