This tutorials provides the details of various Apache Storm primitives such as Spouts, Bolts, Stream groupings and topologies.

Apache Storm is a free and open source distributed real-time computation system that is scalable, reliable and easy to setup/maintain. Apache Storm cluster is made up of two types of processes - Nimbus and Supervisor. Nimbus is a process running on master node that is responsible for tracking the progress of data processing while Supervisor process runs on worker nodes and is responsible for executing the data processing logic. For a better and detailed knowledge of Apache Storm cluster, you are recommended to go through the tutorial - Introduction to Apache Storm.

In this tutorial, we will be discussing the various Apache Storm primitives that are as follows:

Spouts represent the source of data in Storm. You can write spouts to read data from data sources such as database, distributed file systems, messaging frameworks etc. Spouts can broadly be classified into following -

Below diagram shows Spout hierarchy along with some important spouts that come bundled with Apache Storm. BaseRichSpout is an important class and all your Java spouts should extend it.

As we can see that there are some useful spouts that are ready to be used. E.g. kafkaSpout could be used to read messages off kafka topics.

Some of the important methods in above spout definition are open (used for doing initializing work), nextTuple (called by Storm for getting the tuple) and declareOutputFields (used for associating the field names for emitted tuples).

Bolts represent the processing logic unit in Storm. One can utilize bolts to do any kind of processing such as filtering, aggregating, joining, interacting with data stores, talking to external systems etc.

Similar to Spouts, bolts can also emit tuples (data messages) for the subsequent bolts to process. Additionally, bolts are responsible to acknowledge the processing of tuples after they are done processing. Spouts consider a tuple fully processed when they have received acknowledgement for that tuple as well as for all the typles emitted by bolts as part of that original tuple processing. 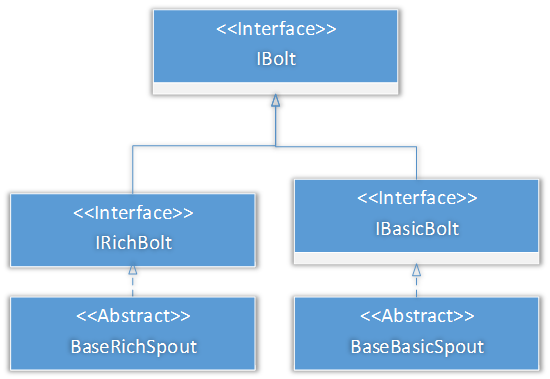 There are following two important classes that Java bolts can extend from:

Since this bolt is extending BaseBasicBolt, it is not explicitly acknowledging the tuples in its execute method.

A new stream grouping technique can be developed by implementing the backtype.storm.grouping.CustomStreamGrouping interface.

A topology in storm represents the graph of computation and is implemented as DAG (Directed Acyclic Graph) data structure. Each node of this graph contains the data processing logic (bolts) while connecting edges define the flow of data (streams). Storm keeps the topology running forever untill you kill it.

Here is a sample topology called ExclamationTopology that will add two exclamation mark to the words emitted by TestWordSpout using ExclamationBolt:

Once you are done writing spouts, bolts and topology, you need to build a jar file containing all of these. Here is the command that you can use to run the exclamation topology in Apache Storm: